In what could be the biggest legal battle between a company and its auditor, Reliance Capital is all set to file a Rs 10,000-crore defamation suit against its erstwhile auditor, Price Waterhouse & Co (PwC), two people with direct knowledge of the matter said. 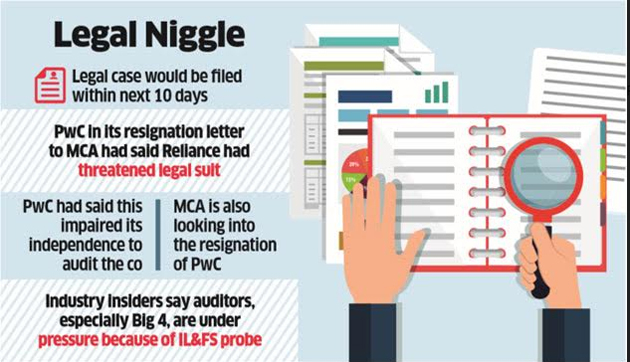 Separately, some shareholders of the Reliance Group companies are also expected to file a class action suit against PwC for eroding the value of their investment.

The decision to take legal action comes after the company received a clean chit from two law firms, a senior counsel and its current auditor, against allegations levelled by PwC. "The board met on Thursday and it was decided that legal action must be taken against the auditor. A separate class-action lawsuit against PwC would also be taken as some shareholders had approached the company regarding this," said one of the persons in the know.

The audit firm caused defamation, reputation loss and also a massive loss to shareholders of the company, the person added.

Price Waterhouse and Co, a network firm of PwC India, had resigned as auditor of Reliance Capital and Reliance Home Finance in June and stated that it did not receive satisfactory responses to its request for additional information from the companies.

PwC, in a letter to the ministry of corporate affairs (MCA), had said it resigned under the provisions of section 143 (12) of the Companies Act. Section 143 (12) deals with the resignation of an auditor in cases where it suspects fraud.

Reliance Capital last week told the stock exchanges it had taken opinions of two law firms, independent lawyers and joint auditors, and found there was no merit in allegations levelled by PwC.

An email seeking comment sent to PwC did not elicit any response. A Reliance Capital spokesman did not specifically comment on the lawsuit but said the company's board will take all appropriate legal steps to safeguard interests of all stakeholders.

According to the persons quoted above Reliance has only decided the quantum of the defamation suit. Also, the class-action suit would be filed separately by some shareholders with either the promoters or Reliance companies themselves could also become parties in the class action suit.

"Several stakeholders are planning a separate class-action suit under section 245 of the Companies Act, 2013 claiming damages against PwC for the loss caused by its action. Shares of Reliance Capital and Reliance Home Finance have declined 48% and 58%, respectively, since June 11, the date when PwC resigned," said a person close to the development.

PwC may be anticipating the legal tussle and has already hired law firms. On June 18, ET had reported that PwC engaged Shardul Amarchand Mangaldas, J Sagar and AZB, and asked them to prepare a defence against not just Anil Ambani-led Reliance Group but also regulators and probe agencies such as National Financial Reporting Authority (NFRA) and the Serious Fraud and Investigation Office (SFIO).

Industry insiders point out that auditors, mainly the big four - Deloitte, PwC, EY and KPMG - are under tremendous pressure due to the investigations in Infrastructure Leasing and Financial Services (IL&FS) and two of its subsidiaries. Investigators have alleged negligence and connivance between auditors and management in their charge sheet filed in the IL&FS Financial Services Ltd case.